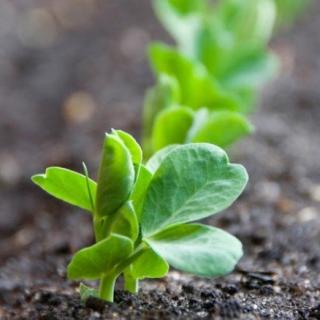 Peas is a valuable food crop. It contains easily digestible proteins and is used in many dishes. Unlike other legumes, it does not contain ingredients that are harmful to human health. In times of war, it can be, to some extent, a cheap substitute for animal protein.

According to statistics, about 125,000 hectares of peas have been sown in the controlled territories this year. This is much less than the previous years, so it is important to do everything to get the maximum yield.

In the technology of peas growing, at least two problems can be solved with the help of fertilizers: increasing of symbiotic nitrogen fixation (biological nitrogen) and reducing the harmfulness of diseases, especially root rot.

In the terminology of agrochemists;biological nitrogen" is nitrogen bound to compounds from the atmosphere, or more precisely from the soil air present in the root layer. For productive work of colonies of nodule bacteria it is necessary to provide plants with molybdenum. Phosphorus in the form of phosphite is effective in the fight against root rot. Before flowering and at the beginning of grain filling, there is an increased need for a complex of trace elements.

What do we recommend?

Now the plants have two or more true leaves, so the process of nitrogen fixation has begun. Therefore, it is necessary to make foliar fertilization with the tank mix of ECOLINE Molybdenum (Complex) 1.0 l / ha + ECOLINE Phosphite (K) 1.0 - 1.5 l/ha.