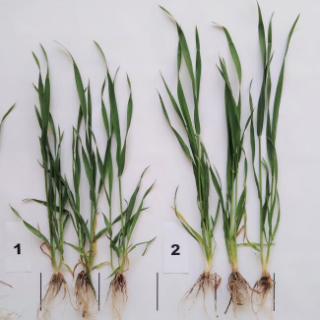 At the beginning of the tube exit phase of winter wheat, the earplugs are laid in the ear, flower elements begin to form as well as the ear's potential productivity. With the appearance of the second internode, a third leaf is formed, which affects the grain filling.

According to our observations, a significant part of winter cereals area suffered from the sharp night temperature fall in April. Shortage of moisture has also a negative impact on the development of the plants throughout the entire territory of our country. Current weather conditions impede the entry of elements of mineral nutrition into the plant, in particular phosphorus. Its content in the soil may be sufficient, but low temperatures and dry topsoil inhibit the absorption of this important element through the root system. Insufficient nutrition of phosphorus significantly reduces the productivity of photosynthesis and is often visible in the form of purple leaf color. What measures can we take in this situation? - The easiest way is to make foliar application, which can be done together with the first fungicidal treatment, which is usually combined with the application of herbicides, insecticides and / or growth regulators. The target diseases are powdery mildew, leaf septoria, pyrenophorosis (yellow spot) and yellow rust.

For such foliar nutrition we suggest to choose fertilizers containing phosphorus in the form of phosphite. The main advantage of phosphite is its fast penetration into the plant, high level of absorption, optimization of the pH of the tank mix. Phosphorus in the form of phosphite stimulates the synthesis of phytoalexins in the plant – these substances neutralize pathogens and thus have a fungicide effect. In such a situation ECOLINE Phosphite (K) or GROS Phosphite-NP can be used at a dose of 1.0 - 1.5 l / ha. In the case of signs of stress caused by high temperatures and lack of moisture, the best effect will be provided by ECOLINE Phosphite (K-Amino) - 1.5 l / ha (not to be applied together with growth regulators!).

On eroded, light soils, as a result of the magnesium leaching deep into the soil profile, as well as unbalanced nutrition with predominance of nitrogen, signs of magnesium starvation of the plants in the form of leaf lightening may appear at this time, which reduces the productivity of the photosynthesis process. To overcome the manifestation of magnesium deficiency, it is effective to perform foliar nutrition with ECOLINE Magnesium (Chelates) at a dose of 1.0 - 2.0 l / ha. Compared to traditional magnesium sulfate, this fertilizer has better efficiency, because the level of magnesium absorption in the form of chelate is several times higher. In addition, this microfertilizer contains other chelated trace elements, in particular iron, manganese and zinc, which activate the photosynthetic potential of plants.

On soil of organic origin, light sandy soils and areas with low copper content it is necessary to add ECOLINE Copper (Chelate) 0,5 - 1,0 l / ha to the tank mix.

We would like to note - even if the plants do not show signs of deficiency of certain elements of mineral nutrition, it does not mean that they do not need nutrition. Investigating and observing the work of ECOORGANIC fertilizers in the fields, we have noticed positive effect of foliar fertilization on different types of soils, at different levels of moisture reserves or different quantity of the main fertilizers. According to the results of the surveys, carried out 10 to 12 days after fertilizers application, their positive influence on the growth of vegetative mass of plants, on the height of plants and the area of ​​photosynthetic surface of leaves was established. In addition, the positive effect of foliar nutrition of cereals in the tube exit phase on the formation of the ear and the development of additional stems was recorded. 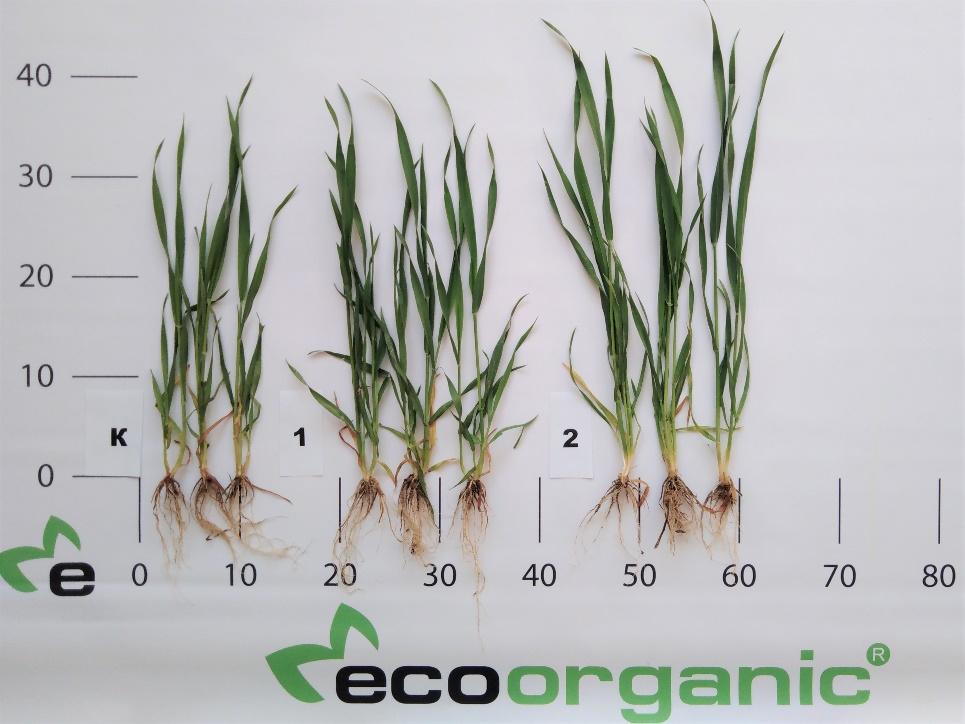