RESULTS OF THE USE OF FOLIAR CROPS OF WINTER CROP RAPE IN 2018 IN VINNYTSIA REGION. 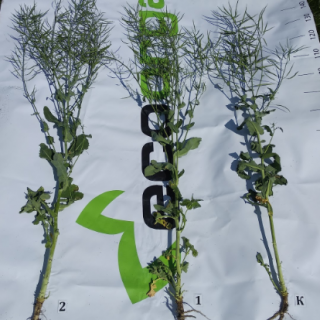 Field tests of the efficiency of the systems of extra-root nutrition by special fertilizers from the company "EKORRGANIK" were conducted in the Mohyliv-Podilskyi district of the Federal District "Golden Colossus" with. Wendicians The soil is gray forest. Under the sowing of rape on the farm the following system of feed was used:

- after reestablishment of 200 liters per hectare CAS.

Indigenous nutrition was carried out only in the spring after the restoration of the vegetation. Schemes of application of fertilizers for foliar fertilization are given in Table 2.

During the growth and development of plants, phenological observations were carried out and the main parameters of the future harvest were determined. The results of the accounting are given in Table 1.

In the case of unbalanced nutrition of plants with trace elements, and in our case, there is clearly a significant advantage of nitrogen over other trace elements, the importance of endocrine nutrition, even with small doses of phosphorus and potassium, is important, which helps to better assimilate plants to nitrogen and increase their resistance to diseases. This was manifested in the form of higher plants with a greater thickness of the root cervix, the mass of the above-ground part of plants and roots in comparison with the control. Accordingly, in plants from variants with foliar feeding, in comparison with the control variant, two or three flowering branches with the highest number of pods were formed. This tendency persisted until fully ripening, which is confirmed by the results of crop harvesting (Table 2).

As we expected, the intensive system of foliar nutrition, which included Phosphorus in the form of phosphite (ECOLINE PHOSPHITINE (K ) in combination with magnesium and amino acids (GOS Amino-Mg) at the beginning of intense growth of biomass, amino boron (ECONINE BORE Premium) and a complex of phytohormones (GROS Health) at the beginning of the budding phase, which ensured better pollination of the flowers. After flowering, the ECOLINE Oliyny (Chelaty) complex and the GVS Quitselium were cultivated for improvement of the pod filling. The yield of seeds compared to control was 4.4 c / ha, or 15.6%.