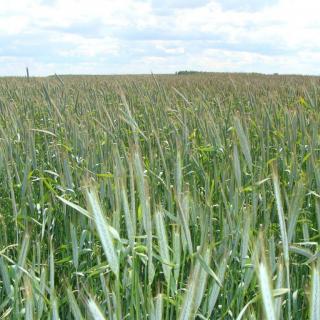 Grain malting barley quality required can only be obtained under conditions of the full range of scientifically based technological measures considering growing zone soil and climatic conditions, varieties and the specific requirements of the brewing industry.
Predecessors  Preferred precursors for malting barley cultivation in areas considered to row crops, after which the soil remains clean of weeds and contains enough nutrients. In Forest-steppe and Polissya Ukraine good predecessors are corn, sugar beets, potatoes. Satisfactory precursors for brewing barley - winter crops for fertilized steam, flax. In sodpodzolic soil and humus-poor chernozemah barley can be sown after legumes.
Soil preparation.  The spring barley belongs to the crops demanding to cultivate the soil. It is desirable for the soil to be well ripped and clean from the storm. Optimal terms of grassland plowing from the second decade of September to the second decade of October. Spring cultivation of the soil under barley begins with harrowing. In cold, rainy weather and prolonged spring harrowing can not be carried out, and immediately begin to cultivate the hay.
Fertilization.  The system of fertilizing spring barley is primarily determined by predecessors. Barley is well used after the organic and mineral fertilizers introduced under the predecessor. For brewing barley it is important that the grain has a low content of protein (9-11.5%) and high starch content (not less than 63-65%). Therefore, make low doses once before sowing. In the breeding zones of brewing barley in Ukraine, moderate doses of mineral fertilizers (N 30-60 P 30-80  K 40-80 ) are introduced in Ukraine that ensure the yield of barley grain of the required quality and the yield increase in the range of 3-9 c / ha compared to the control without fertilizers .
Preparation of seeds.  To sow it is necessary to use conditioned seeds of high reproductions. When growing for intensive technology, seeds of a weight of 1000 grains of 40-50 g, with a growth force of at least 80%, are used. Seed treatment is a mandatory, cheapest and effective measure of plant protection. When choosing a preparation for treatment it is necessary to take into account the range of its action, the expected impact of diseases, varietal features, weather conditions, price. Recommended for the treatment of barley seeds: Classical T.K.S. - tebuconazole, 60 g / l; Classic Trio k.s - 37.5 g / l flutriafol + 25 g / l tiabendazole + 15 g / l imazalil.
Sowing.  The best way to sow is to ensure the uniformity of the plant's feed space. Typically, string and narrow-row sowing methods are used. In areas with sufficient moisture, on heavy soils, seeds earn a depth of 2-4 cm, on light soils 5-6 cm.
The highest productivity of plants is obtained in terms of seeding in the range of 4-5 million / ha. The tillage rate in such crops is 2-3. Sowing is carried out in the early stages, as soon as the soil state allows you to enter the field. The criterion for sowing is the maturity of the soil, when the qualitative growth of the soil during cultivation is achieved. Sowing must be completed no later than the second decade of April, even in the late spring. Brewer's barley sorts are particularly vulnerable to late sowing. In addition to reducing the yield significantly deteriorates the quality of grain. Increases film thickness, decreases its size, decreases the content of starch.
Caring for crops . The spring cereal crops suffer from storms more than winter. Early terms of sowing spring barley do not allow clearing fields from storms due to pre-planting soil cultivation. We recommend using herbicide 75% trimmer on crops of spring barley for combating bourgeons, inc. in a dose of 0.020 - 0.025 kg / ha and other herbicides.
Retardants are used to prevent crop rotations and associated effects. According to the data of the literature, the quality of grains of brewing barley sharply deteriorates during harvesting. Specifically, the growths did not fit, the grain size - the weight of the 1 st and 2 nd fractions (grain size 2.5 mm) was 85%, filamentary - 9%, protein - 10.5%, extractivity - 79.7% . In the fallen plants, the indicators were - 61%, 10%, 14.7%, 77.7%, respectively.
Culling can be caused by various factors, including high nitrogen doses (N 80-140 ), which are introduced with intensive growing technologies. Shedding dramatically worsens the uniformity of illumination, the exchange of air in the pressed to the ground stebalosy, holds moisture, which increases the incidence of plants, significantly decreases the productivity of photosynthesis, reduces the yield and increases its loss during harvesting to 15-30%.
Binom® 46% (Chlormequat-chloride, 305 g / l + Ethophon, 155 g / l, Preparative form - water-soluble concentrate, etc.) is used successfully to combat plant regeneration.
The mechanism of action of chlormequat-chloride and euteon consists in the fact that water-soluble active substances are assimilated by plants mainly due to its green parts, and chlormequat is chloride, in addition, also the root system. Binom® 46% Dollar counteracts the physiologically induced eruption by shortening and thickening of the interstitial. To some extent, the drug prevents the penetration of pathogens rotten to the root neck than protects against the breakage of the stems.

In this way, plowing causes great harm. The aim of the research was to determine the effectiveness of the growth regulator Binom® 46% vr.k., to increase the resistance to planting of brewer's barley.
Research methodology: The  experiments were carried out in the Korsun-Shevchenkivskyi district of Cherkasy region, in phase 33 (on the VVSN scale) - the appearance of the third node, with the Binom® rate of 46% - 2.5 l / ha. The consumption rate of the working solution is 300 l / ha. The technology of growing spring barley is generally accepted for the zone. Shedding was evaluated at stage 89 (on the VVSN scale). The degree of deflection was evaluated on a 9-point scale, where 0 is the absence of deflection; 9 - complete incubation of plants.
Result of the research:  Plant growth regulators (GGRs) are an important element in the technology of growing breeds of brewer's barley. As the study showed, the use of the drug Binom® 46% g.k. caused barley growth inhibition in plant growth processes, which were visible in 4-5 days after treatment. PPP allows you to delay the onset of the formation, reduce the amount of force, and, moreover, exhibit an indirect fungicidal effect. The results of our studies indicate that the use of the drug Binom ® 46% vr.k. with a consumption rate of 2.5 l / ha significantly reduced the height of plants. The difference between the control and the experimental version was 8.6 cm.
Measurements of the length of the stem showed a significant decrease in the height of the third internode - from 2.7 cm. As a result of application of retardant Binom® 46% vr.k. observed thickening of the stem. Thus, the thickness of the third internode increased by 0.8 mm at a flow rate of 2.5 l / ha compared with the control. (Table 1).

Processing of crops by  reintarnet Binom® 46% vr.k.  ensured the increase of the resistance of plants of spring barley to sinking by reducing the length of the upper interstitial. In particular, in the control version of the planting of plants was an average of 2.0 points. At the site where the retardant  Binom® was injected 46% vr.k.  there was no climb.
The mass of 1000 grains grew substantially, in the version with the introduction of retardant  Binom® 46% vr.k.  it exceeded the control by 0.5 g. The grain yield from the processed variant exceeded the control by 0.4 t / ha.
To control diseases during the growing season, crops are sprayed once or twice with fungicides (Esculap® 25%, Cu, Alto Super 330 EC, Cp, Rex Duo, etc.).
Barley is most likely to be damaged by pests such as the Swedish and Hessian fly, streaked with blueberries, cereal aphids, bread crumbs, a bug - a bad shell, etc. During the spraying with Killer® 55%, k.E., Fastak, BI-58 New against pests must take into account the economic thresholds of harm.
Harvesting . Harvesting is the most responsible period in the breeding of brewer's barley. The quality of grain (first of all its color) deteriorates at a late pick up. It is desirable to brew the brewing barley in full ripeness by direct harvesting at a moisture content of 16-18%.
Conclusions  On the basis of the above material, it can be concluded that the effectiveness of the use of retardant Binom® is 46% vr.k. on brewing barley is provided by increasing the resistance of plants to laying, reducing losses in harvesting. For effective use of the drug Binom® 46% vr.k. An important factor is the good development of plants in the buccal phase. Using the Binom® Growth Regulator 46% in. When brewing barley, it ensures a good harvest and facilitates harvesting.
We recommend using Binom® 46% yr. on winter and spring barley with intensive growing technologies, as well as on varieties with moderate resistance and prone to inclination.